[분석] Investors in Samsung Biotechnology … Responsibility of the Authority 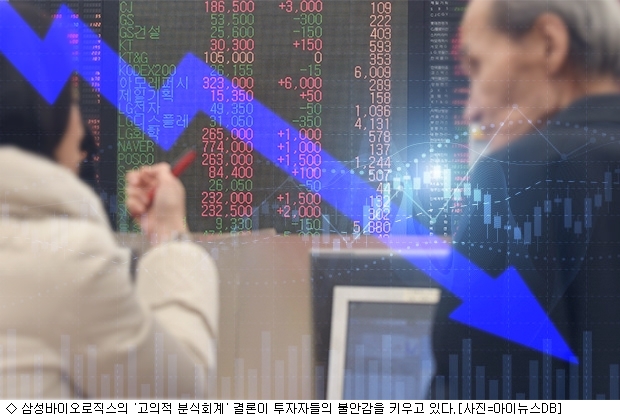 [아이뉴스24 한수연 기자] Samsung Bio Logics "misusing and deliberate" collection has raised investor concern. In addition to the suspension of the trading stock, the associated funds and associated securities (ELS) had red light when the period could not be extended. The fact that the financial authorities, who decided that there was no problem in the past, approved the accounting system after two years, added to the confusion of investors.

According to financial authorities and industry on the 16th, Samsung Bio Logics' census at the end of 2015 ended with the intentional misuse of computing. As a result, the Supervisory Commission submitted a recommendation to reject CEO of Samsung Bio Logics, a winner of 8 billion earned, and a prosecution fee.

Korean Exchange decided to suspend the sale of Samsung Bio Logics shares at 4:39 pm on the day of the announcement. As the stock market has already closed after trading on the day, trading suspension of trading after hours was applied. Basically, investors were blocked from buying and selling Samsung Bio Logics shares in the market. The next day, the parent company, Samsung C & T, also crashed into a 52 week low price house.

Associated funds are also bad. According to F & G's financial information company's guide, the total value of the Samsung group set 25 (KRW 1 billion) is 1.7 trillion and the net asset is 2 billion KRW, the average one-month return of the money was -5.88%. As Samsung's main Electronics share share (Samsung Electronics) has been sharply every year and Samsung Bio Logics problems have been added to the market, the product will continue to be negative this year.

A petitioner who said he was the owner of a small business on the bill on the Cheong Wa Dae National Petition, "I thought I had had good prospects for the future bio-health industry and joined the Fund Samsung Bio Logics. It is not convincing that a corporation should be guilty, and that one investor should see the damage. "

Another investor also noted, "We had a lot of talk about the company, but because it had been listed and recognized by the government, we thought it was stopped suddenly," he said.

The financial responsibility of the financial disaster is also rising. Two years ago, the Financial Supervision Service (FSS) was criticized, who announced that she had no problems with the Samsung Bio Logics accounting process, to reverse her situation.

In fact, the Financial Supervision Service (FSS) has confirmed post-transition accounting issues in May-June 2016, before listing Samsung Bio Logics. However, in accordance with the regulations set by the Financial Supervision Service (FSS) for publicly listed companies and the Chartered Association of Chartered Accounts for non-listed companies, it held the Chartered Korean Accounting Association at the time of the Samsung Bio Logics supervision.

A senior officer of the Financial Supervisory Service said, "The Korea Public Accounting Association overseen the announcement at the time of listing Samsung Bio Logics, the result was reported on the disclosure side and received the securities report." (From then on) There was a point that I was more active. "

However, it is also difficult to avoid responsibility for checking the outsourcing report for such an essential issue. In particular, the Financial Supervisory Service attended the related meetings held before and after the Samsung Bio Logics list, and it was reported that there was an opportunity to address the problem.

The Korean Exchange and the Supreme Court, with listed companies in the first instance, are uncomfortable. Samsung Biologics had lost for three consecutive years at the time of listing on the Kospi in November 2016, but success could be listed on the KOSPI because the regulation was modified to allow listing if the exchange and & # 39; The Supervisory Board meets market capitalization conditions of 600 billion won and a capital of 200 billion wins or more. . Samsung Bio Logics is the only company listed so far.

Another investor who said he was a shareholder of Samsung Bio Logics said, "The biggest reason for this is that the stock exchanges and the FSS have no problems, we have to compensate for the damage," he said.