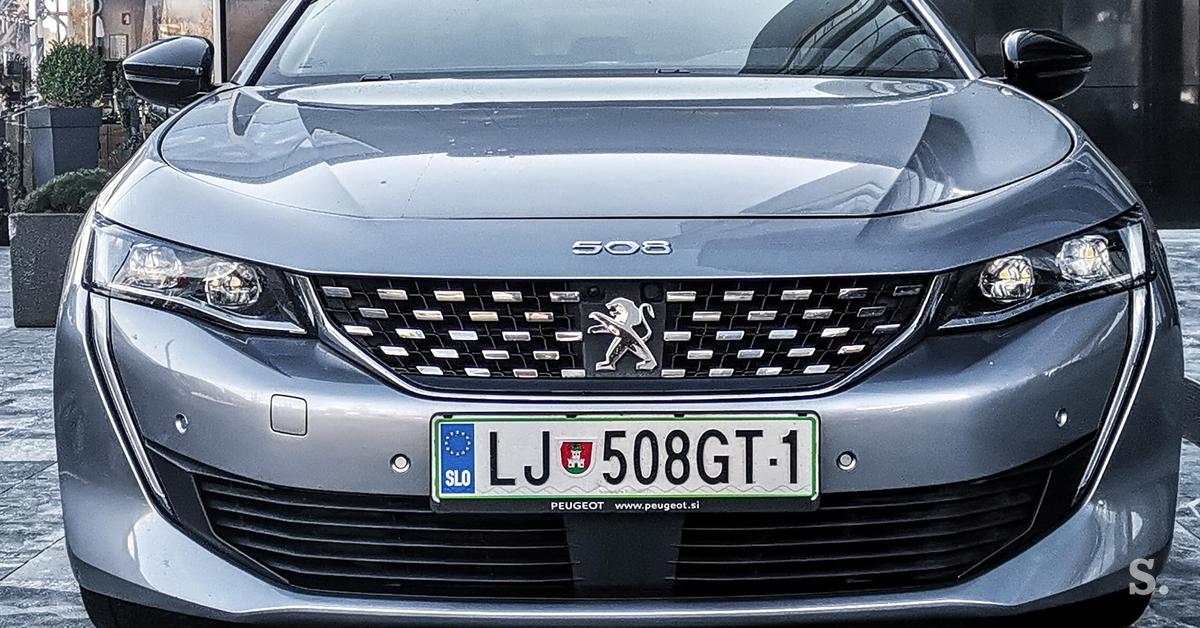 Not only was it smaller, lower and wider than its predecessor, but a completely revived new generation of peuge 508 led to the Slovenian roads. Once a seven-year model is now geared primarily to entrepreneurs who want to stand out on the road. With a new start, the French will want to mix rates at the most selling limousines and sell 150 cars this year in a rapidly falling segment. On Slovenian roads this year, of course, much attention will be paid to the new 508.
Photo by Gasper Pearman

The new 508 only shares the name with its predecessor

Peugeot has prepared a new generation 508 for future challenges. The last French salon goes to the market at a time when the number of sold limousines in segment D sharply falls. Only last year it dropped by 21% and now it is only 3.4% of the total market. In the end, only 1,084 cars were sold to physical buyers in the segment.

The dealer realizes that the importer is aware that the leading volkswagen passat can not be caught, but they want to mix this year with 250 cars (150 limousines and one hundred caravans), mixed at the winning stage. Among the biggest competitors, besides Passat, they also mentioned opel insignia, renault talisman, mazdo 6 and most similar to the Volkswagen arteon.


This will be the biggest newest Peugeot limousine #foto


How to get into an ungrateful segment

As we have repeatedly pointed out, Slovenes were much less favorable for limousines for many years and prefer to choose a more useful caravan. Similarly, it will be here, where about 60 percent of customers will decide on the version of the caravan. The latter will not occupy the sunny side of the Alps in June, but will soon get on the limousine after the sale.

One of the main advantages of a customer's belief is the appearance of one thousand. Already at the Slovenian presentation held in Ljubljana BTC, many passersby enthusiastically admired the latest model Peugeot. Many also photographed it, and only confirmed that Peugeot chose the right one and chose an attractive appearance. This is supported by a boldly designed front (standard halogen lamps, full LEDs available for an additional fee) and rear (base and optional adjustable, and LED technology), low roofline and doors without frames. This is a four-door sedan with a coupe roofline.
Photo by Gasper Pearman The two rear lights are available behind. Basic and optional adjustable, both in LED technology.
Photo by Gasper Pearman


The new 508 is 4.75 meters long (its predecessor is 4.83 meters), its height is only 1.4 meters (six centimeters less than its predecessor!). The wheelbase is shorter by 2.4 centimeters compared to the previous model. The download volume is from 487 to 1537 liters.

Despite some decisions, it's not too late behind the room

Peugeot is aware that the roof line Coupe brings restrictions on the back of the lava space. Here, in particular, seats for the head of passengers on the rear bench, hence, there are rear doors without frames. At the same time, they earned a few millimeters. Since several customers of such cars want a panoramic roof, which is inside inside which they occupy not less than two centimeters of height, the way of opening the roof has changed. The glass part is therefore opened up, so there was no need to compromise on space. However, the compromise occurred on the very panoramic roof – it can only be opened at a speed of 90 kilometers per hour.


The interior is an essential i-cockpit

Peugeot was expected to install the so-called i-cockpit, which was introduced for the first time six years ago on the model 208. The system has a compact steering wheel, a 12.3-inch screen in front of the driver's eyes and an additional 10-inch touch screen on the center console.

Despite the sporty interior, new 508 up to 32 liters of drawers and storage surfaces, a two-level center console and rear bench, broken in the ratio of 1 / 3-2 / 3. Inside, of course, the main attribute is the second generation i-cockpit.
Photo by Gasper Pearman The stock is not very short, so they may have higher levels of comfort problems for higher level passengers.
Photo by Gasper Pearman


It must be prepared at least 25 thousand

In the 508, four package equipment is available – basic operating (about 15% of customers will choose for it), the most successful attraction and GT line and GT sports (about ten percent of customers decide). The cheapest is, therefore, the price list 508 with an introductory diesel engine 130, manual transmission and active package. She will have to prepare a minimum of 25 thousand euros.

Most will still buy diesel

Despite the fact that the two gasoline engines are 1.6 liters of pure 180 (133 kilowatts) and 225 (165 kilowatts), most consumers will choose a diesel engine. There are as many as three – the main 1.5-liter bluehdi 130 (96 kilowatts) is available only with a manual gearbox or automatic eight-speed gearbox. There are also two-liter bluehdi 160 (117 kilowatts) and 180 (133 kilowatts), both available exclusively with an automatic transmission. At the end of the year or in the first half of next year, the hybrid car will also be on the road. In the basic version, the multi-tasking system measures eight inches, and in the case of better packed packages, it is ten inches.
Photo by Gasper Pearman The three-dimensional effect of the rear light is beauty combined with the function. They were supposed to be at a distance of 150 meters.
Photo by Gasper Pearman There are four packages, two gasoline engines and three diesel engines. The most powerful diesel engine with 133 kW and the charm and GT line will be most sold.
Photo by Gasper Pearman

September is the month of Alzheimer’s disease! Pošta Slovenije and the Spominčica Association will raise awareness about dementia – a silent epidemic of today | Democracy on the news najdi.si – najdi.si

Nine people were detained during the shooting in Ljubljana

Jack Nicholson no longer appears in public, acquaintances claim that he has dementia